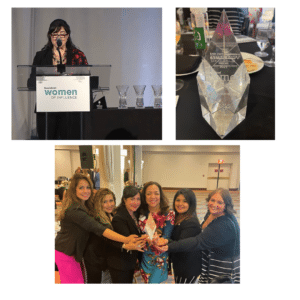 The first thing you notice when you walk into the conference room at Sonia Parras Konrad’s law office is a large, colorful painting hanging on the wall. The painting depicts Lady Justice, a common symbol used in the judicial system that represents fair and equal administration of the law. But instead of holding the traditional sword, Lady Justice is holding the hand of a young girl, leading her forward.

When the going gets tough, Parras Konrad glances at it and remembers her purpose: to empower women in all walks of life.

Parras Konrad started her law firm on Nov. 25, 2009, as a 40th birthday present to herself. She had been working with immigrant survivors of gender violence and sexual assault for more than 12 years, both as the founder and legal clinic director at the Iowa Coalition Against Domestic Violence and as the co-founder and co-director of Asista Immigrant Assistance, which is a national nonprofit that provides resources to people assisting immigrant survivors of violence.

“Happy birthday to me, I’m going to do whatever I want,” she remembered thinking. She wanted to continue working with immigrants and assault victims – but on her own.

Since opening the firm 12 years ago, Parras Konrad and her team have served thousands of clients in areas of family reunification, deportation defense, domestic violence survivor’s defense and immigration law.

When she works with women, especially, Parras Konrad makes a point to push them to reach their full potential so they can look back at everything they’ve done in their lives. It’s not just about surviving, she said.

“When my clients were preparing for my citizenship exams, they would tell me, ‘I can’t do this, it’s too hard.’ I would tell them, ‘You crossed the desert with kids on your back. You walked for weeks. You have five jobs. This is hard?’” She said.

In 2014, Parras Konrad founded the Latina Leadership Initiative after noticing that first- and second-generation immigrant women were stuck and didn’t necessarily have the same leadership development opportunities as other women in the community. Since its beginning, more than 70 women have graduated from the program.

“Truly, my passion is to elevate and support women and to fight for women’s rights.”

WORDS TO LIVE BY
“You can do this.”
When I get antsy or doubt myself, I always have a voice on my shoulder that repeats this. It reminds me when I was a child and learning to roller-skate and my mom would watch me and every time I fell, she would say, “Get up, you can do this.”

She represented more than 200 clients pro bono who were affected by the infamous 2008 ICE raid at the Agriprocessors Inc. meatpacking plant in Postville.

You have successfully subscribed to the newsletter

There was an error while trying to send your request. Please try again.